I’ve been absent for four years.

I also have some time now before my wife and I open our first restaurant to have some fun sorting cards. I’m clearly still tip toeing my way through the random box of 5000 cards I bought. As a re-entry into the blog, I’m gonna tell the storie of some of these players. 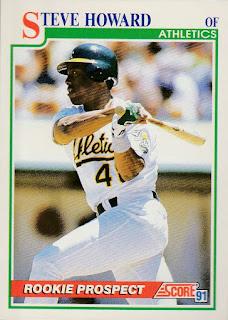 Steve went to the same high school in California (Castlemont Highschool, Oakland, Ca.) that Hall of Famer Joe Morgan did. Over 30 years later, but that’s sweet.

1990 was the only year Steve was called up to the show. He was trying like heck during spring training though. As this story in the Sonoran Union Democrat, on March 27th 1990 recounts it. Steve Howard was put in as a pinch hitter in the bottom of the ninth inning, down one run with two outs and bases loaded, and played the hero! Hitting a two run single up the middle for the game winning runs. Steve says, “I was just sitting there with Tony (manager Tony La Russa) told me on the spur of the moment that I was hitting”. He goes on, “I know what the situation is with the team. My chances of making it are slim and none. I just try and go out there and have fun . . . I want to make myself look good. Anything can happen and I want my work habits to look good.”

Continuing that streak of making his own luck with his work habits, his first at bat in the majors he struck out, but managed to get to first on a wild pitch. What an entrance to the Bigs! 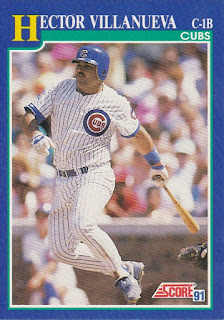 This guy, this guy is legend in Chicago. The back of the card describes him as “an affable man, with a wide grin and a shaggy mustache, well liked by his teammates, he is slightly inclined toward weight and could almost be called rolly-polly.”

Harry Caray in his legendarily drunk-uncle fashion could never pronounce Hector’s name correctly, often with comic error. While I could not find a sample online, I did find this – which attests to his cult status in the windy city and Caray's lubricated tongue. (https://hectorvillanuevasociety.wordpress.com/)

His second MLB at bat was a home-run against the good guys, the Cardinals. Villanueva is quoted as saying “I got home, I was out of breath, I ran so fast.” In the off season, the catcher was checked into a clinic for eating disorders, as he described it a “fat farm”.

The man could hit, and eat. 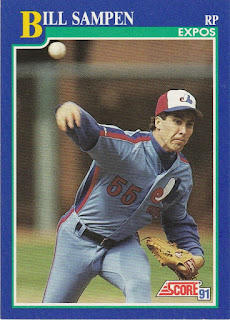 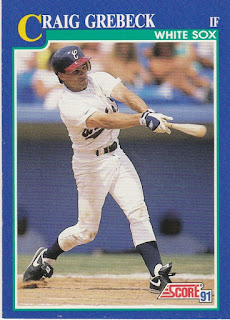 These are two UER, hmm. Sampen suffers from the shame of having "long" on his card back spelled "along". There are worse sins.

We're looking at you Score.