That's right. It's 80's night. Put on the New Wave music, perhaps Duran Duran, maybe some Depeche Mode, or if you feel like dancing some New Order.

That's my choice - New Order for the win.

Couple of cards from that sweet decade, where we saw the junk wax era begin, and the definition of what was an acceptable haircut stretch (here's looking at you Flock of Seagulls)


Howell was outed as a cheater by Tucker Ashford (an ex-mets manager) who saw it in his living room, on his couch, watching the playoffs.  Tucker called his contacts in the Mets organization, who then relayed the information to the umps.Sure enough, Howell had pine tar on his glove . . . a definite no no. Howell was suspended 3 days for the incident. 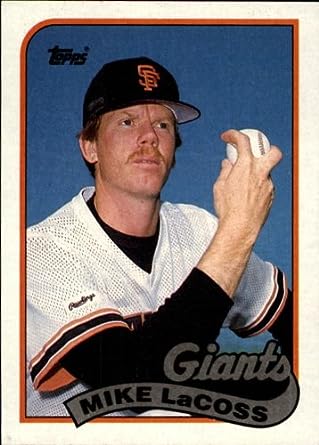 Like Yu Darvish in the 2017 World Series, this guy seems to be tipping his pitches.  Known for his split finger change, Mike had quite a long and successful career. Probably could have had more success if he had learned not to show the batters his grip.

p.s. sorry about the image quality, something is up, looking into it now :)
Posted by Tim at 11:46 AM