So the World Championship hangover has come and gone. Man was that good kool-aid.

As I finish sorting my update series, and cataloging it (I should finally have a haves-and-wants list up), I look over and there is this pile of cards. Ah yes, the extreme value plasticine box, a real pile if there ever was one. Would the Buckner be the best of the bunch? We shall see.

All of today's cards are from the Leaf company.

Today's first card, once again in honor of the storied Redbirds, is a St. Louis Alum. 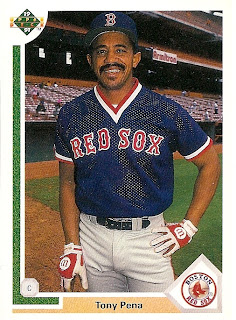 Tony is one of very few catchers to earn a gold glove in both the AL and NL. His work with the Cardinals in '87 was exemplary. Moving into quite a succesful coaching career after playing, he is currently the bench coach for the New York Yankees.

He is on a short-list to replace Terry Francona as manager in Beantown. I certainly think he would be a good fit there, and deserves the chance to manage the helm in the bigs.

I like the design ok. It is sharp, no intrusive design elements. I like the position and team logos located in opposite corners of the bottom. A surprisinly handsome card for the early 90's.

The next card is Joel Skinner. 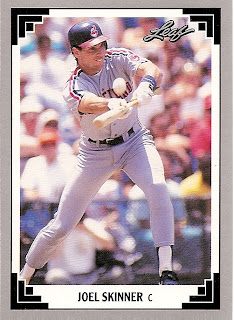 If I played baseball I would regret that they chose my picture to be of me bunting. I researched it, Joel is not known for his bunting prowess. Come to think of it, who is?

He is also a bench coach like Tony Pena, but working for the A's these days.

The card is beautiful. I love the "scrapbooky" design conceit, and the silver border works well with the Braves uniform. My favorite card of a bunt.

And last, the ugliest: 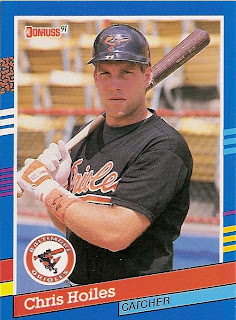 Thank good-ness we got through the 90's. So many photoshop tricks, I am glad we worked through the tricks.

Chris here only played a few games this year for the Orioles, but went on to play a whole bunch of them up until 1998. Fans of the Orioles that grew up watching him behind home-plate seem to really like him.

He did hit one of only 23 ultimate grand-slams in history. And, his may be the best. His slam is the only one to ultimate-ultimate. He hit a grandslam, at home, down three runs with 2 outs and the count at 3 and 2.

More sweetness from the Plasticine Box. 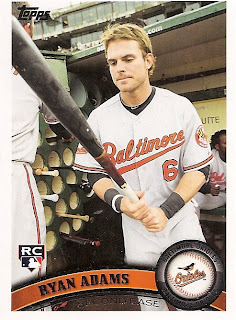 Ah . . . To Participate in Ubiquity

I've seen so many others.

What of the season if it weren't for injury? 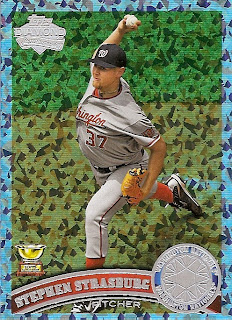 Having finished with the initial sorting of the Update series I have a few posts worth of some sweet cards. I really love the old-time logo contrasted with the blue diamond affect, the juxtaposition is pleasant.

I hope the kid can pitch lights-out next year. Tommy John's surgery is not the death-knell it once was. His ligament may be stronger now then ever.