As I continue to look at these players from my sophomore year of high school I recall those days with nostalgia, and wistfulness. Both of those vices reside in the realm of age, never visiting the young man. But boy, our first player is one of the big ones from my youth. He wasn't really on my radar until he played for the dreaded Yanks. 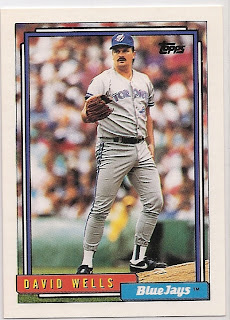 It wasn't for a couple of more years and alot more Big Mac's that Wells really reached his dominance. For some reason his perfect game stands out in my head as significant. Perhaps I had just started watching Sports Center seriously, not sure. Did love watching his dominance of the era, and this is my first card of his. Somewhere in this box of 5000 I bet there's more ;) 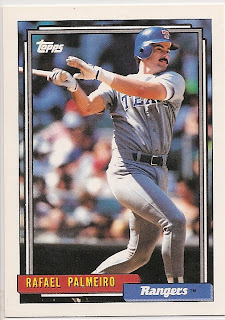 Woo Hoo another great player! All I remember about Palms here was his amazing mustache at different points along his career. It wasn't until I was looking at the back of this card that I remembered he started life as a Cubbie. This year he led the league in doubles, and the year before that he led the league in hits. This year on 7/2/91 He belted his second homer in one game for the second time that week! 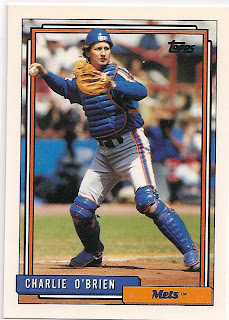 Another sweet catcher in action pose card from Topps. I am a fan. Charlie here played for eight teams, won the World Series in 1995, and caught for 11 Cy Young Pitchers. He invented the newfangled hockey masks that catchers wear because he got tired of gettin' dinged by foul tips. On a personal note, his son players for the Wichita State Shockers, a very good team located near my grandparents in Hutchinson, Ks. 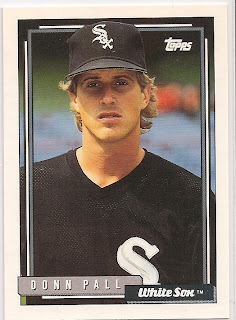 Donn "the Pope" Pall pitched around the league for 10 years. He is currently a community rep for the White Sox. Once a shout-sider, always a shout-sider.

This round has some good ones. Just sitting here typing in the cold of Chicago waiting for my wife to get off work so we can meet at the local watering hole. As I wait I shall educate myself on some of these players. 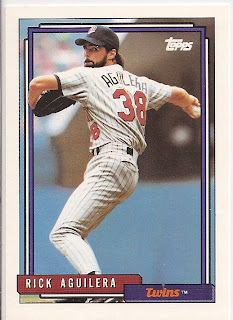 This is the year that Aguilera's career really hit overdrive. It was in 1991 that he got his first invite to the all-star game on the back of 42 saves that season. He would go on to the next two all-star games as well. Having taken a few years to adjust to the role of a closer, he found career resurgence this year and continued to dominate the league with his veteran arm coming out of the bullpen. 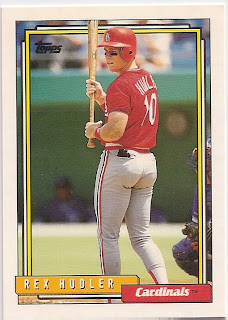 Woohoo a Cardinal. This journeyman player was making a two year stop playing for the redbirds. In Rex's 14 year career he played every position but pitcher and catcher. He even went on to play in Japan for two years and won their series one of them. He is now a color commentator for the Royals. That would be a sweet job. 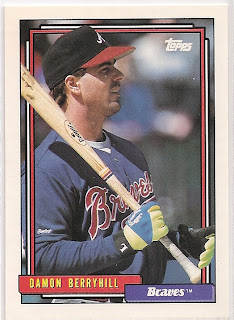 So many catchers already in this set. Currently the manager of the Ogden Raptors, a minor league team in Utah under the Dodger umbrella. I can't help but wonder what Ogden, Utah is like. 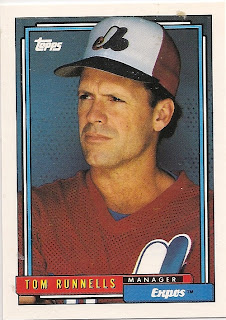 Tom replaced the previously posted Buck Rogers as captain of the cellar dog Expos. He only lasted a year after some questionable moves were made by him, and an eerie episode where he came to spring training in marine fatigues, reportedly channeling Norman Schwarzkopf. He is currently a bench coach for the Rockies. 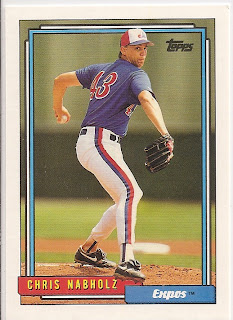 Currently a home mortgage specialist in Pottsville, Pennsylvania, Chris had a short 6 years playing in the big leagues. The back of the card says he is 5-0 in games attended by his Mother. Here's betting he's a wicked little league coach for his kids. 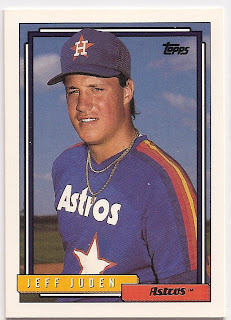 At 6'8" and 275 pounds Jeff was one of the top high-school prospects of all time to come out of Massachusetts. He never quite found his groove in the Big Leagues. However, on August 25, 1995 he holds the record as being the only pitcher to be the third pitcher to hit a grand slam in a season. Lot of heavy swingin' pitchers that season! 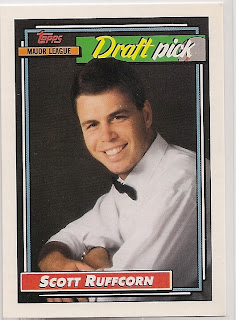 This card is Epic! Man, what a great Senior Photo. The back of the card lists Scott's freshman through junior year stats at Baylor. He was drafted by the White Sox but had a mediocre 5 years. He is now a High School baseball coach in Austin, Texas. 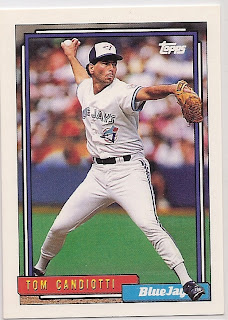 Look at the form of that wacky knuckle-baller. Considered a strikeout artist during his career, he now announces for the Arizona Diamondbacks. In what is a testament to the ergonomics of the knuckle ball he led the league in 1986 with 17 complete games. 17! Perhaps the coolest think about Tom is that he is in the International Bowlers Hall of Fame, unfortunately the only Hall he will find himself in. 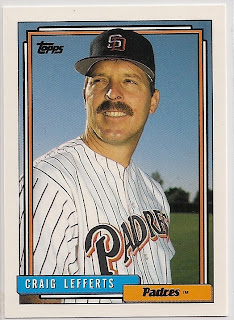 Craig here is from Munich, and if I know anything, I know that that is one sweet Pilsner sippin' mustache. A solid 11 years left him with the record for most games by a Padre at 86. He is also currently the last pitcher to hit a walk-off home run. On April 25, 1986 in the bottom of the 12th inning this lanky pitcher swung the big lumber. I tell you, this post has pitchers that can hit! 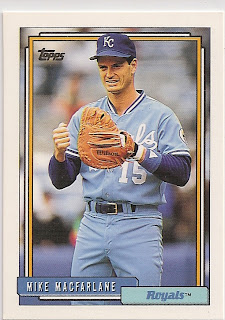 I watched old Mac here play during my youth growing up in Missouri. He was an above average catcher and held the record for most games as a catcher for the royals in 1994, surpassing the record held by John Wathan. He now owns a baseball training facility with Kevin Seitzer. Mac-N-Seitz. 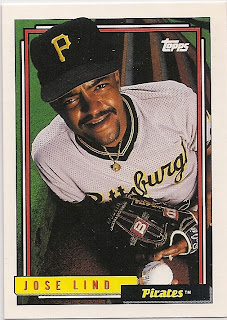 It looks like Chico is thinking to himself "What the hell did they put the camera up here for?"
Posted by Tim at 12:00 PM No comments:

Continuing along. A couple of nice ones collated. 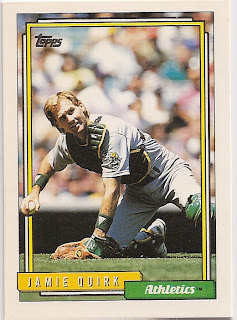 This is the last year for the veteran catcher. In what was a rather lackluster 18 year big league care he still managed to win the big one with the Royals in 1985.  Now he is a bench coach for the Chicago Cubs and promises to help pull that team out of the doldrums. I like this action photo Topps has chosen for his card this year. Catcher's always seem to have the best photos in my opinion. 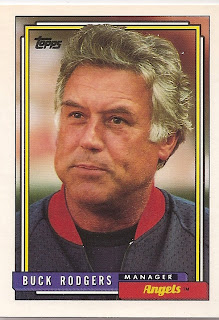 Besides a couple of interesting book ends to his career recounted on Wikipedia I always felt that this guy below was the better of the two. 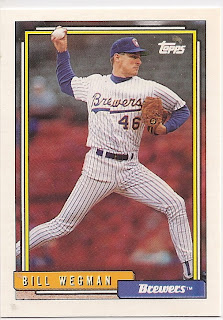 Bill was drafted by the Brewers in 1981 and played all of his eleven years with that team. His career year happened in 1991 where he won 15 games and had a 2.84 ERA. Something about that old uniform I think is sharp. 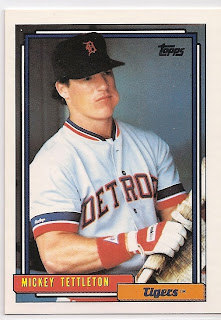 This is my second card posted with Mickey here. In the earlier post I attached a video of his fruit loop commercial, a short fad. Somehow I don't think that lump in his cheek is fruit loops?
Posted by Tim at 8:34 PM No comments: