While this certainly isn't my favorite design of the series, the subject matter of some of the cards saves it for me. Speaking strictly to the design, once again the weird brown-orangey border looks horrible. The large seal in the lower right reminds me of something from the federal reserve. Now, I realize this is the "gold" themed set, I just don't know why Topps chose to evoke this notion with stodgy design.

The plus is the sweet photos of Nolan Ryan, Cal Ripken, Albert Pujols, and so many more. I will never have baseball cards by most of these people, and it is cool to get great looking photos of them in my collection. The "technicolor" effect on a few of them is over-done, but over-all it was fun to look at. 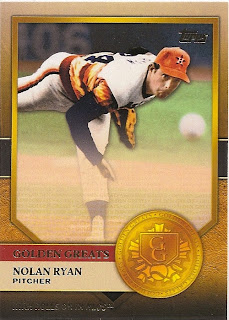 
I have a few extra for trade, and need a few to finish my set. Check out my Haves/Wants list to see if we can help each other.
Posted by Tim at 11:10 AM No comments:

I am going to spare few words for these horrible looking cards. The best part is the blurred out section in the bottom right showing the team celebrations. When my favorite thing about a card is the most blurred out, tough to make out section, this is not good. Ugly card with a boring theme. 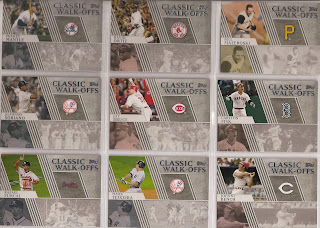 Topps takes a down swing here with this insert design. I think the use of the picture on the right still works, but the design elements on the left look weak. The golden home-plate is kind of lame with the team logo in the center. It looks low class.

The overall orange tone of the front fails to work with many of the cards (although GM-1 here is kind of sharp with Seaver in the Met's colors). The over faded base of the cards is strange, and unnecessary. 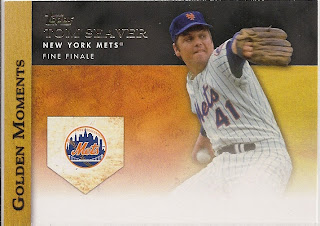 I am going to attempt to collect a master set of 2012 Topps flagship product. I am not sure what that really means, but to me for this project I will not seek out all parallels. Just base cards and all inserts. As I now have a Haves and Wants list up on the side, as you are able, check it out and help me complete the set. (As I bought a case, I will have a lot of doubles to help you complete yours as well).

To keep things interesting around here, as I complete the various insert sets I will review them briefly.

First up are the Gold Standard inserts.

While not all that visually stunning on their own, I thought enmasse they formed a handsome page: 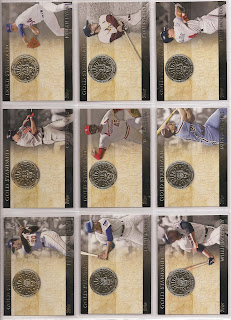 It looks "federal" to me. I know others have bemoaned all of the unused design space on the left of the card, but I think it lends a degree of "staid"-ness and appropriate level of dignity to these accomplishments.
I like the photo on the side. Does anyone know if those are actual photo's of the moment described on the card?
The gold standard makes it feel a bit like a treasury bond or currency plate.  I think this fits with the theme as well.
Overall I say B+. I smart, handsome looking insert set, and I hope to see an Ozzie make an appearance in the later Topps series (he isn't in the set at all yet :( ).﻿
Posted by Tim at 1:40 PM No comments:

As the 2012 card season has begun, I have dedicated myself to trading with others to help complete my sets, and most importantly help others complete theirs. To that effect please notice on the right side of the blog my continually growing have and want lists.

I am very interested in collecting all gold sparklies, and will have a bunch of inserts and base cards for trade. Please let me know when you see something you need, and I will send it out, hopefully in trade for something I am lacking.

Let the mailing begin!
Posted by Tim at 1:19 PM No comments:

I am not sure how it happened. I came home after work today and there were three envelopes with my name on it. Not so unusual around birthday season.

One was from my sister. Chelsea and crew, wishing a fine birthday upon me. She works at Hallmark. She always has the perfect card. Very nice.

The other two were, judging by their return addresses listed in the upper-left corner of the envelope, from people I did not know. You would think it might be eBay related, but not so. Just a couple of people who sent me random-kindness cards. Do you think they knew it would arrive near my birthday?

Matheo16 is apparently a trader abroad. This envelope arrived with a Canadian stamp (and I do have quite a philately penchant), so bonus already. 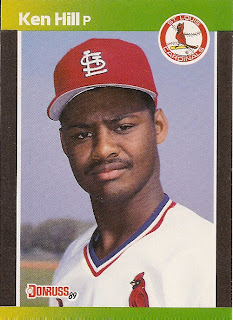 A cardinal rookie card. Thanks Matheo!

Kenneth, as wikipedia refers to him, only registered four games this season, '88. And to me his expression seems both "whatcha' takin a picture of, bub?"-ish and "I'm tickled you want my picture"-ish.

The next package was from Ms. Konnie Frey, out of Albuquerque. Her stamps, while not Canadian, were a lovely festive ornament montage.

She sent me a load of Cardinals. Too many to list in one post. And several of her cards have inspired future posts (my mullet-and-stash collection is imminent). Here are some of my faves.

First,. a card to join the "Smiles" binder. 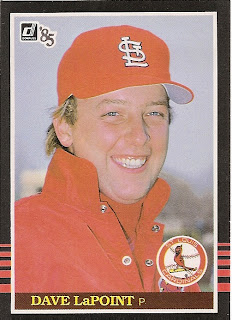 Is Dave Lapoint skiing? It sure looks like he is. Perhaps he's smiling cause he is moving to San Francisco the year after this card was published. His cheeks look so rosy draped in all of that red.

The next is Whitey. Stoic, bulldog Whitey.

Double Whitey. Both pictures obviously from the same day, game, and photographer. The Zog deserved better. 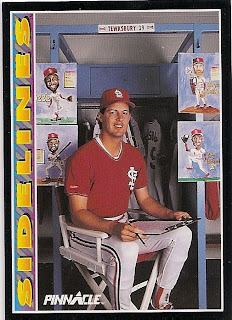 And last, the main man, the Wiz. 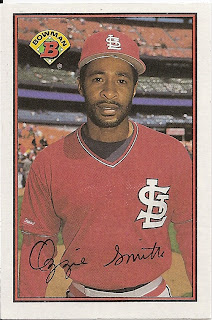 Thank you so much, generous strangers. The cards are fun.

Email ThisBlogThis!Share to TwitterShare to FacebookShare to Pinterest
Labels: Smiles

The Birthday Cards and Necessary Adventures

It began the day before, with a surprise birthday party at a local WhirlyBall facility. If you haven't been bruised by the wicked fun that is WhirlyBall before, and if you know not of what I speak, check this out: http://www.youtube.com/watch?v=1Z1vHI27EbM

You saw it right. Bumpercars and weapons. Trust me, the video barely does it justice. Those with an imagination, and an understanding of inertia, should realize the devilry of the game. Get 10 friends, get them now.

Skee-ball would be the stalwart classic. That 3.6 difficulty of a 50 point hole, and the almost never seen 100 point ball, gives the sweet raffle booty. It's like I entered to win the door prize 3047 times. That's right, that's how many tickets we earned. (You would think that would take a long time to count such a haul, but no . . . they weigh them. Ingenious indoor carnival devilry)

I have tendinitis from skee-ball.

On to the redemptions. And my sweet birthday cards. They came in packs like this. 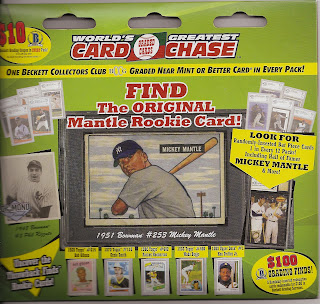 For 1350 hard fought tickets I could own this. Good thing my wife and brother figured out which games had the sweet payouts. And truth-be-told, all one had to do was watch where the 12-14 year old set was gaming. Those kids had it figured out! Ticket's galore!!

Intrepidly we three built our dragons hoard. All the way to where we could afford two of these beauties.

Here's the other side. 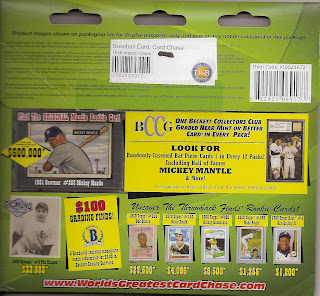 The sweet part is my main man Ozzie made the case. I long for that sweet rookie card. Only Padres card I can think of that I want. One day . . . one day.

Now the first of the shenanigans is apparent.

(I didn't realize it until examining the packs for this post, just to keep things temporally accurate).

Look in the center of the white rectangle, just to the left and above the D&B logo, and just right and above the bar code. See that innocuous black line.

Redaction! The case has been redacted. This could involve national security issues. That is what I typically associate with blacked out redaction's. Television has taught me so. My baseball cards have been redacted. What was worth 1350 tickets that needed to be made secret, to never see the light? After looking at it closely in my kitchen I can just make out the numbers 1199?

Dawning realization.
Inflation or scoundrel behaviour.
Could this be its true cost in tickets?

We will never know, and these beauties will always be worth 1350 tickets to me.

Then the kidney punch. This came along each card in a pack. 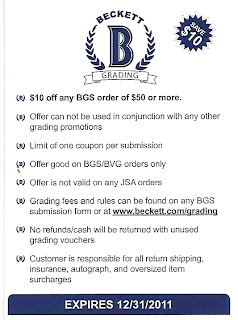 The expiration date. Really?!? You raised the ticket price on my purchased treasure. You raised it and gave me expired goods. Seems like eggs past their due date.

It could all turn around if the cards were sweet. Something with a vintage. Something from a decade I don't have. 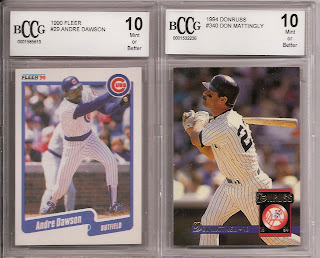 Nope. Two cards of some stand out hall of famer's, but still. Two cards from the glut of early 90's production. Fleer?

Although, I have to admit. I have just started collecting so I don't care they're from the "trash" era. I like the design of the fleer with the cubbie blue. And Boggs, he's sweet.

Birthdays are fun. This one was awesome! The cards are in plastic.
Posted by Tim at 9:24 PM 2 comments: