A Hall Of Famer and Someone Else


It is rare in the box of 5000 that i run across cards of guys I recognize more than just a name. Sure there are the Andres Gallaraga's, the Ozzie Canseco's . . . yeah, that one. There just are not that many hall of famers in this box. 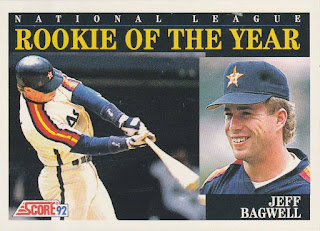 While Bag's has never been one of my favorite players, I was surpised to read a few interesting things about him while looking him up.

I didn't realize that he was a trade from the Boston Red Sox. Nor, that he was a third baseman, up until the spring training before his rookie year. The team liked his bat so much they moved him to first (they had Caminiti locking up third), in the hope he would take to it. And boy did he ever. The first half of the season he may have committed 9 errors, but only 4 more after the all-star break.

I also learned that the trade involving Bagwell still causes my sous-chef from Boston to groan in displeasure. Apparently they view that trade with disfavor. That makes me smile a bit.

Now the other guy, well he's not as heralded. But to my suprise, after umpteen 1991 Score, the box only yielded two of the 1992 variety. So Pedro, you make the cut! 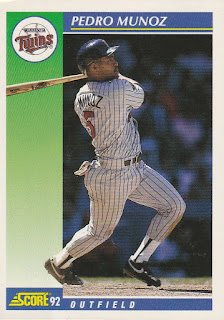 The most interesting thing I could find about Pedro Munoz was that in 1992 he led all American League right fielders in double play's turned at 4. He smoked those NL chumps (Larry Walker, and Andre Dawson), who only had 3.

Don't take a lead on Pedro. Don't run to far from base on a sharply hit liner.